Rocketship started school the first week in September, the same as mommy (i.e., me). She entered a Montessori Toddler classroom, her first time being cared for in an institutional setting for more than an hour and a half (though, I’m not sure that the church nursery really counts as “institutional”).

The first week was great — the teachers told me how much they loved having her in class, loved her personality. The second and third weeks, she came down with a cold, and ran a fever on and off, becoming sluggish and not quite herself. The fourth week, she cried every nap time. And that Wednesday, the last day of school for the week, we were told that Rocketship cried so long and so hard that she woke up the other children. They didn’t mind that Rocketship wasn’t sleeping, though they wanted her to, but it was a problem that she was keeping 8 other children from having their nap.

Rocketship was sent home with a note. I called it a kind, positive riot act, which told us that for our daughter to get the most out of her classroom community, she would need to learn to be more independent. That would mean that mom and dad would have to change their behaviors. We would have to carry her less, and have her sleep by herself.

My partner and I knew that Rocketship was probably ready for this, and had been talking about it. But we weren’t ready. We liked having her in our bed, our little snuggle bug. We liked her relying on us for comfort, and her being with us. But now that had to change.

That night, we did the bedtime routine, with the addition of three stories (including the new special big girl bedtime book) and nursing with the lights on. I laid her down, and tucked her in, and walked out of the room. The door was left open, but we had a baby gate on the door so she couldn’t run out to us. And she cried. We did “gradual extinction” — I went in after 3 minutes, 5 minutes, and 10 minutes until she fell asleep without us. An hour later, she fell asleep leaning against the baby gate, and I led her to her bed, where she slept through the night.

I was sad after she fell asleep. She did it all by herself, as a big girl, even if it was hard and we had to help her.

A couple of people have asked me how it felt to have a teacher tell us to change our parenting techniques, and I have to say that I was resistant at first. One of the first notes home that hinted at a problem asked us to pick her up less when she was whining — which I was indignant about doing. “Why would I want to not respond to my child’s communications?!” I asked. So I didn’t do anything different.

But, when it became clear that Rocketship’s behaviors were affecting other children, I sprang into action, even though the same advice was offered. Why?

Because one of our family values is responsibility. This is a reference to the story by Harlan Ellison called Paladin of the Lost Hour. We view responsibility — cleaning up after ourselves, behaving correctly according to the situation — as a bridge to respect. That’s how we can respect ourselves and others, by being responsible.

Rocketship needs to act responsibly at school — she needs to behave correctly. And as her parents, we need to help her do that. And in that sense, the note home from the teacher wasn’t about changing our parenting techniques so much as reminding us about our values. 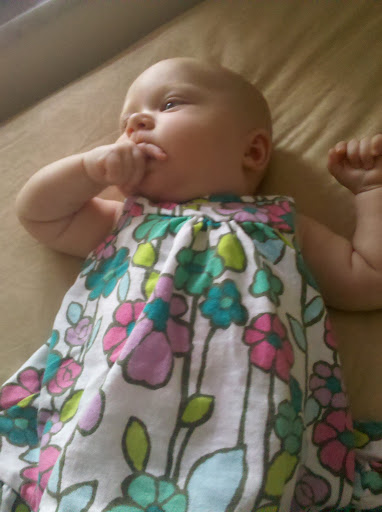 I wasn’t always comfortable with the idea of my mom being my daycare provider. Sylvie is familiar with my mom and comfortable with her. And I have had plenty of chances to observe the two of them together. Those two things are not something you can sneeze at; everything I have read about vetting facilities says those are things you want.

Not only that, but I was able to broach the idea of making “Nanny Notes” and sharing them with my mom — that way my mom knows exactly how I would like my daughter to be cared for (i.e. I am clear about my expectations) and she knows exactly how to spoil my daughter (i.e. I expect my mom to still be a grandparent and do what she wants occasionally).

Nothing I found on the internet about preparing your child for daycare really approached the subject the way I have in my own preparations, so I thought I would share my list.

What I want from a Non-parental Caregiver:

1. Someone who will love her, bond with her; someone who will build trust with her. I subscribe more or less to the Attachment Parenting philosophy espoused by Dr. Sears, and I believe that attachment is key in Sylvie’s development — particularly the psychosocial development task of infancy: learning to trust. This means that when Sylvie cries, my ideal caregiver will respond, because crying is a way of communicating need. Which brings us to…

2. Someone to fulfill her needs. Her needs, as I see them currently, are: eating, sleeping, clean diapers, play, and love. Since Sylvia is breastfed, this means that I will be providing her grandmother with expressed breast milk. Sylvia is not too keen on her bottle, so we may be switching to more of a sippy cup soon. She will start solids at six months, so those kinds of equipment will be needed as well. Sylvie will need a couple of swaddle blankets and a pacifier for her grandma’s house. I gave my mom a set of cloth diapers already. We’ll need to make sure there are good toys at both home and at grandma’s. And I know my mom loves Sylvia.

3. Someone to keep her safe and secure; provide limits. This means that my mom and I will work together to make sure that my mom’s house is appropriately child-proofed, but it also means that we will have to work jointly on discipline issues. Right now, discipline isn’t too much of an issue — after all, she is only an infant. But by the time I graduate, which is when I foresee this arrangement ending, Sylvie will be old enough to be willfully disobeying.  We don’t want to give her mixed messages about what is and is not appropriate, which will require communication. Also, I want Sylvie to be disciplined with positive methods, which will also require communication, so that my mom knows what I mean when I say this.

4. Someone to play with her, and to be her partner in learning. I believe that play is the key to learning, and so I think it’s very important that Sylvia plays. Of course, she can and does play on her own, but play with an adult is important too, because it provides Sylvie and opportunity to stretch her skills with a technique called scaffolding. The play should be directed by Sylvie, if at all possible, to give her a sense of efficacy. Reading is play too!

5. Someone who respects our boundaries as her parents. I am the momma, and with my husband we are ultimately responsible for Sylvia’s care and upbringing. How we want things done matters. However, this means we are also responsible for communicating those boundaries. A major way we’re going to do this is through “memo” type of correspondence; I like to have things in writing.

The thing about this list is that it’s basically what I expect from myself as a parent. I think that’s as it should be — the care for my daughter by non-parental caregivers should be as close to what her parents provide as possible.

Combating Sexual Harassment in a Fraternity (As a female non-member)